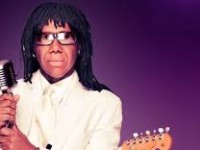 I went to see the incredible Nile Rodgers and the Chic Organisation last night at the Manchester Apollo. I didn’t stop dancing for the two hours of their performance. The show began with Nile Rodgers showing the video to his new song “I’ll be There”, just so when he played it later in the set […]

It may only be the early days of the year but I am already looking forward to the summer.  This year promises to be special with a cluster of amazing events to look forward to. It all starts in June with Parklife festival at Heaton Park, Manchester. It’s become the traditional place for me to […]