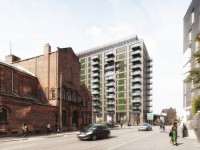 Manchester based residential property management company urbanbubble announced it has been appointed by FICM Ltd, the property company headed by Fred Done, to provide the management for Trinity, a new PRS (private rented sector) development of 380 apartments and townhouses at the junction of Trinity Way and Blackfriars, Salford.

It is the first appointment for urbanbubble on a development of this kind, whereby there is a single asset owner along with a single Asset Manager. With thousands of PRS new homes in the pipeline in Manchester, the company sees PRS as a major opportunity.  The homes at Trinity will be ready for occupation by January 2018 and the meantime, urbanbubble will work closely with FICM Ltd to develop a robust, efficient and above all, resident focused management strategy for the development.

Michael Howard, managing director, urbanbubble said:  “I am thrilled to be working with FICM on Trinity, it will be one of the first, true PRS schemes built and will be a huge benchmark for other developments to follow.  At urbanbubble we’ve been working very hard over the past few years to understand the specific challenges and requirements involved in managing PRS schemes, there’s essentially two customers – the asset owner and the residents, and it’s how we look after them, and their homes which will be the makings of a successful PRS development.”

Simon Ismail, director, FICM said:  “urbanbubble’s approach really impressed us, they have a great reputation with the management of their existing portfolio.  They understand the difference between tenants and customers.  With our PRS schemes we offer much more than just an apartment.”

Designed by 5plus Architects, Trinity includes a range of one, two and three-bedroom apartments and seven townhouses.  The grade II-listed Black Friars pub will form a distinctive entrance to the development and is integral to the design.

urbanbubble was set up in 2008 by Michael Howard.  Based in Manchester’s Northern Quarter, the company provides a range of services to developers, landlords and residents, with the principle aim of ensuring residential developments are managed and maintained to the highest standards.

The news was featured in the Manchester Evening News, Place North West and the Businessdesk