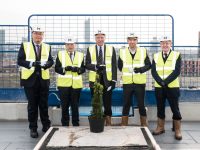 UK and International real estate developer and investor Scarborough International Properties Limited and Beijing Construction Engineering Group International (BCEGI) celebrated a major milestone in the construction of phase one at Middlewood Locks, the much anticipated £1 billion mixed use development in Salford and at the gateway to Manchester city centre.

A ‘topping out’ ceremony took place on the roof [at the top] of the final building in the first phase of the development which comprises 571 apartments and 10,000 Sq ft of commercial space. The internal fit out is now underway with the first residents expected to move in in Spring 2018.

Guests, including Salford City Mayor, Paul Dennett and Vice Consul General to the People’s Republic of China in Manchester Fan Yingjie, witnessed the planting of a yew tree (traditionally planted on roofs to ward off evil spirits) and then anointed the tree with wine, corn, oil and salt to bring prosperity, wisdom, abundance and hospitality to the development and its residents.

The 24.5-acre Middlewood Locks development is now progressing apace to deliver a vibrant new waterside neighbourhood where two great cities, Salford and Manchester meet.  It will provide 2,215 new homes and 900,000 sq ft of commercial space including offices, hotel, shops, restaurants, a convenience store and gym. With unique landscaped areas of green public space, the scheme is being developed around three large basins of the Manchester, Bolton and Bury Canal which connects to the River Irwell and is a short walk from the central business district and retail amenities of Manchester city centre.

Last month saw the launch of a new two storey purpose built marketing suite and show apartment with interested buyers queueing to buy their new home in Middlewood Locks on the day the marketing suite opened.  Middlewood Locks also has the largest allocation of new homes available through Help to Buy in the City, with the first residents moving into their new homes in Spring next year.  The Government backed scheme allows first time buyers onto the property ladder with as little as a 5% deposit.

“We are delighted to achieve ‘topping out’ for the first phase of our Middlewood Locks development which signifies an extremely successful partnership with BCEGI. Despite a complex delivery programme and tight timescale this first phase remains on schedule, to the credit of BCEGI and the wider project team.

“Middlewood Locks is a major undertaking for us and I am pleased to say greatly supports the regional economy with strong job creation and ultimately much needed new homes in the city.”

“I am very pleased we have reached this important milestone on Phase One of Middlewood Locks and our partnership with Scarborough Group is going from strength to strength.

“BCEGI is developing long term relationships with local contractors and sub-contractors which are proving to be very successful.  We are wholly committed to growing our business in the UK, especially in the Northern Powerhouse region and our work here in Greater Manchester, is providing a solid foundation for us.”

“It is wonderful to visit Middlewood Locks at such a significant stage in the project. The partnership between Scarborough and BCEGI is an excellent example of how UK and Chinese businesses can work together to achieve positive results, not just in terms of creating this new community but also creating jobs and helping economic growth.”

“It is very pleasing to see the Middlewood Locks project becoming the success story that we had envisaged, bringing real benefit to the people of Salford. This is a brownfield derelict site being brought back into beneficial use with a new residential district.

“Together with BCEGI we have had great success in securing work opportunity for our young people and to date Middlewood Locks has employed 15 apprentices.  Furthermore, over 60% of the Middlewood Locks workforce is from the local area and my colleagues at Salford City Council have been working closely with BCEGI to establish work placements and host open days resulting in ten full time positions taken by people who were previously struggling to get back into employment.

“We are excited to see further benefits for the community through working together over the future phases of this development, ensuring that growth in the city delivers on our social values and tackling poverty aspirations as a city. ”