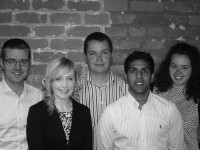 Manchester based Tim Groom Architects has announced the promotion of three of its team and the appointment of two new members of staff.

Tim Groom said:  “Matthew and Gemma have worked with me for nine years and their promotion to Associate recognises their significant project running experience and their valued contribution to the business over a long period of time.

“Andy joined us as a Project Architect 18 months ago and brings with him a wealth of experience from his work at other practices.  We are delighted that all three accepted our offer of promotion and I look forward to working with them to deliver continued success for the business.”

The appointment of three Associates bolsters the management structure of the practice following the announcement of four new recruits earlier in the year and the two new starters who recently joined the team. It takes the total number of people employed by the practice to 12.

Azhar Kapadi completed his Master of Architecture (Part II) at Cardiff University in July this year while Alice Bufton completed her Degree (Part I) at Liverpool University also in July.

Tim Groom Architects has received recent planning approvals for a boutique hotel at Bruntwood Hall in Cheshire and a 121 studio apartment development for students at Trafford Street in Chester. The firm is also working on a number of residential commissions in Manchester City Centre including a 14 storey PRS scheme for Mulbury Homes on Great Ancoats Street and a number of residential projects in Liverpool.

The promotions and new recruits featured in Place North West, Insider and the BusinessDesk.