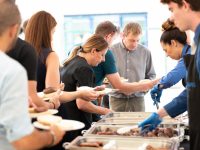 On Thursday 2 August, Thrive welcomed around 80 guests, including Club Thrive members and other business people from Greater Manchester to Atlas House in Wigan for their first summer BBQ.

The BBQ took place in the garden at Atlas House, making use of the green area. Everyone thoroughly enjoyed the sunshine and the food.

Ashurst Communications organised the event on behalf of Thrive, including the invitations and guest list. Catering was provided by Carrington’s who served delicious food and the marquee was hired from Aries Leisure.

The BBQ was put on to make the most of the advantages that co-working provides- allowing people to network with others whose field of work aligns with their own and ‘pick their brains’ to allow a mutually beneficial connection.

The feedback we gained was overwhelmingly positive:

Emma Johnson, director of care at Elite Care North West said; “It was fantastic to meet new people and strengthen relationships with people who are already part of Thrive.”

Chris Armstrong, director at Lowry Recruitment said; “The food was delicious and the chance to connect with new and interesting people is always welcome!”

After such a success, we are looking forward to organising similar networking events in the future with Thrive.

Atlas House has a growing community, with businesses making the most of the collaboration and the break-out spaces. It was clear to see from the BBQ that deals are being done and businesses are working together.

25 businesses are now a part of Club Thrive, 14 of which are thriving at Atlas House.