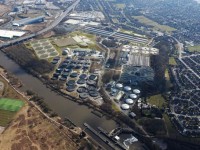 Last week Salford based contractor PP O’Connor announced it has been appointed by Celtic Technologies to carry out the bulk earthworks, remediation and ground stabilisation required for the enabling works for £170 million modernisation of the Davyhulme Wastewater Treatment Plant which is the largest of its kind in the North West.

The site, located west of junction 10 of the M60 motorway, Trafford, Manchester serves a population of more than a million people. The upgrade is expected to improve the quality of the water entering the Manchester Ship Canal and it is expected to take 36 months to complete in total.

Charmaine O’Connor, chief executive, PP O’Connor said:  “Our work at the Davyhulme Wastewater Treatment Plant will pave the way for the expansion and upgrading of this essential infrastructure site.  As with all our projects, our aim is to recycle as much material as possible for re-use on the project, this will include treatment of contaminated soils and other excavated materials.”

PP O’Connor will excavate, sort and remediate approximately 250,000 cubic metres of the land to create three new piling platforms on to which the new facilities will be built.  This will include the on-site decontamination of soils and the crushing of excavated rubble and bricks for re-use within the works.

PP O’Connor’s work is expected to be complete by Christmas, then the site will be handed over to the main construction partners Laing O’Rourke Imtech Joint Venture (LORI) on behalf of United Utilities, to complete the works.

With its headquarters in Irlam and regional office in Liverpool, PP O’Connor is a leading demolition, bulk earthworks and civil engineering contractor.  The firm directly employs 170 highly skilled people and provides regular training courses as well as working with five apprentices this year.

The news was featured in several publications including Place North West, the Construction Index, Demolition and Recycling International, Demolition News and The Businessdesk.