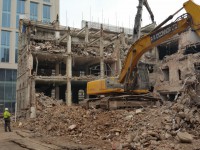 PP O’Connor was appointed by construction and engineering company Laing O’Rourke who has been hired by Mosley Street Ventures (the developers of No 2 St Peter’s Sqaure), which is headed by Fred and Peter Done.

Charmaine O’Connor, chief executive, PP O’Connor said:  “The demolition of four buildings in the heart of the city centre is not without its challenges, we’ve worked closely with our client Laing O’Rourke, and MPT (who are building the new Metrolink tram stop at St Peter’s Square directly opposite our site) to minimise the impact and disruption caused by the works.

“We delivered the project on time and on budget, with all of the materials excavated or removed either being recycled back into in the final building or used elsewhere.  I look forward to seeing the completed No 2 St Peter’s Square in 2017.”

With a project value to PP O’Connor approximately £600,000 the scope of operation included: the removal of all remaining loose furniture; soft strip of internal features; complex building separation from the remaining development within the block ahead of the hard demolition activities.

The demolition work also included the removal of ground floor slabs on two of the blocks.  The remaining two buildings have basements and PP O’Connor developed a temporary works solution to retain the existing basement walls during the demolition works and facilitate the piling operations when the construction of the new building begins.

The work was carried out in the full gaze of the general public, many of whom passed the time watching the work progress as they waited for trams in St Peter’s Square.

Demolition rubble from the superstructure was taken from site to PP O’Connor’s local recycling facility and crushed to and crushed so that it could be returned to site to create the piling platforms to the new basement area of No. 2 St Peter’s Square.  Metal removed from the site has been recycled.

With its headquarters in Irlam and regional office in Liverpool, PP O’Connor is a leading demolition, bulk earthworks and civil engineering contractor.  The firm directly employs 170 highly skilled people and provides regular training courses as well as working with five apprentices this year.