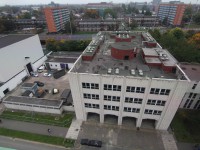 Irlam based demolition and bulk earthworks specialist PP O’Connor has been appointed by Arcadis (formerly EC Harris) on behalf of The University of Manchester to carry out the demolition of the Faraday Building in preparation for the construction of the £60 million Graphene Engineering Innovation Centre (GEIC).

The demolition work began last week and will take approximately 20 weeks.  PP O’Connor will remove several buildings, including the 1967 Faraday Building, the chimney and the link bridge to the Faraday Tower (the tower itself is being retained) at the 8,400 sq m site.

Charmaine O’Connor, chief executive, PP O’Connor said:  “We are proud to be at the start of the delivery of GEIC, it will be a major centre for development of Graphene and no doubt have a significant impact for The University of Manchester and the City itself.  We carried out the demolition and ground preparation works for the National Graphene Institute in 2013 so it’s great to be back and involved with a new Graphene building project.”

While the majority of the work will be confined to the site, it is expected there will be a number of weekend road closures of Sackville Street in the New Year to enable the link bridge to the Faraday Tower to be demolished.  Details of the closures will be released closer to the time.

Mel Manku, Partner at Arcadis said: “As Project and Cost Managers on behalf of The University of Manchester, it’s important we select the right team for each stage of GEIC and the initial demolition works carry various sensitivities and complexities.  PP O’Connor’s approach and track record on working on confined, challenging city centre sites and their impressive health and safety record, made them the right team for the job.”

With its headquarters in Irlam and regional office in Liverpool, PP O’Connor is a leading demolition, bulk earthworks and civil engineering contractor.  The firm directly employs 156 highly skilled people and provides regular training courses as well as working with five apprentices this year.

The news was featured in Demolition and Recycling International, Demolition News, NFDC News and Insider