Planning granted for The Crescent, Salford 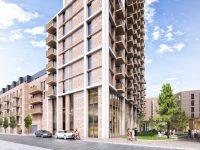 Euan Kellie Property Solutions has announced its planning application for The Crescent, Salford, on behalf of Property (Done) Limited, has been granted approval by Salford City Council.

Designed by 5plus Architects the 156 one bedroom, 223 two bedroom and 20 three bedroom apartments will be spread over three buildings comprising six, 17 and 22 storeys.  In addition there will be car parking, secure storage for 236 bicycles, landscaping and 8890 sq ft of commercial space.

Euan Kellie, Euan Kellie Property Solutions said:  “The Crescent development will be a fantastic addition to the Crescent, providing new homes for rent, as well as commercial space to support the growing community.”

Simon Ismail, director, Property (Done) Limited said: “Gaining planning permission for The Crescent marks a significant step as we aim to realise our vision for the important site.”

As part of the new development the former Black Horse Hotel will be demolished.  Phil Doyle, 5plus Architects said: “5plus has an established reputation in mending and enhancing Listed buildings as shown at Trafford Town Hall and the Corn Exchange, Manchester, and would always endeavour to retain buildings of local or architectural significance in a scheme if practical.

“Indeed down the road at Trinity we have incorporated The Black Friar pub as an integral part of a second Fred Done residential scheme which received planning from Salford City Council last year.

“But The Black Horse Hotel had been allowed to fall into dereliction by others and it was impossible to include without seriously compromising the entire design of this important site.

“Sometimes the past has to make way for the future.”

It is envisaged work will begin on site later this year and building work will take approximately 36 months.

News of the planning permission was covered by several publications including Property Week, Manchester Evening News , Insider, Place North West and the Businessdesk.