New tenant and renewals at One Marsden Street, Manchester 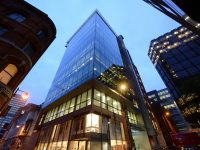 OBI Property has announced Gerald Eve has renewed its lease on 3,500 sq ft of space and ABN AMRO has taken 2,500 sq ft on the fourth floor of One Marsden Street, Manchester M2 1HW.  Both deals are ten year leases with breaks at year five.

OBI Property acted on behalf of building owner, the Standard Life Investments UK Real Estate Fund, and the deals come just a few weeks after Cushman & Wakefield renewed its lease on the second and third floors of the building.  Another occupier recently expanded on the first floor, adding 4,300 sq ft to the space it already occupies on the sixth and seventh floors.

Andrew Cowell, transactions and asset management, OBI Property said: “Demand for workspace in prime buildings and in central locations in Manchester city centre like One Marsden Street remains very strong.  We had a lot of interest in the building and it is great to see new occupiers as well as existing ones expanding.”

ABN AMRO, is relocating from Anchorage, Salford Quays into the city centre to support the growth of its business in Manchester.  The company was advised by Aston Rose.

Deborah Bell, Commercial Director, ABN AMRO said: “We’re delighted to be moving into One Marsden Street, its prime central location is spot on for our team, clients and introducer partners.”

Property consultants Gerald Eve is expanding its space in One Marsden Street and acted for themselves on the deal.

This news was published by Insider.