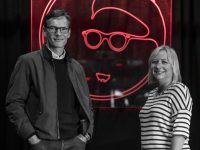 Inner City Music, the charity that owns and operates Manchester’s Band on the Wall, has announced Lisa Ashurst, director, Ashurst Communications and Julian Curnuck, finance director, Urban Splash have joined the board as trustees.

Julian, who has been finance director at Urban Splash for 11 years, joined Inner City Music last month.  His main focus will be to provide strategic advice and guidance as it develops plans which could see Band on the Wall increase its capacity by approximately 45% (to 500 people) and importantly, provide more learning and participation facilities for its education and charitable activities delivered through its partner charity Brighter Sound.

Julian said: “I am delighted to join Inner City Music at this exciting time as we look to expand the capacity and facilities at Band on the Wall.  With major developments taking place around the venue, in the next few years we’ll see the area come into its own and Band on the Wall will be right at the heart of it.”

Lisa is providing strategic communications advice to Inner City Music and helping to build relationships with local businesses and the City.

Lisa said:  “It’s a real honour for me to be involved with Inner City Music.  Band on the Wall is far more than just a music venue. It has an amazing legacy but, importantly, has a very exciting future.  By developing the facilities at Band on the Wall, more people will be able to take part in the hugely successful education and development programmes run by our partners Brighter Sound.”

Inner City Music’s vision is to enrich people’s lives by enabling them to access, enjoy and participate in the best music from many cultures in a stimulating, social environment. The extension of Band on the Wall will help provide an integrated education programme, developing the venue as centre for creative music making, music technology and multimedia.

Gavin Sharp, CEO, Inner City Music said: “Lisa and Julian join the Inner City Music board of trustees at a very exciting time for us.  Their skills and experience will be invaluable to us as we move forward with our plans to develop Band on the Wall.”

Band on the Wall has been one of the cornerstones of Manchester’s thriving music scene for the greater part of the last century.  Band on the Wall exists to promote equality and diversity through music and bring the best music from around the world to the stage – both at the Manchester venue and across the country through its touring schemes.

Lisa and Julian’s appointment was covered by Manchester Evening News.