G2V signs for The Chancery, Manchester 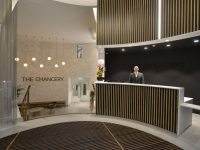 OBI announced recruitment group G2V has acquired half of the sixth floor (4,520 sq ft) in The Chancery at Spring Gardens on a five year lease. The deal brings G2V’s two Manchester city centre operations together under one roof for the first time.

G2 Recruitment Solutions, will move from Colwyn Chambers on York Street. Vivid Resourcing will move from 1 St Peter’s Square. The two businesses specialise in recruitment across IT, engineering, life sciences, energy and the public sector.

The move brings together both businesses and is part of a wider strategy to create a central Manchester hub for the business.  G2V is head quartered in London and also has offices in Bristol, Birmingham, Glasgow, Amsterdam, Frankfurt, Brussels, Los Angeles, Miami, and Houston. It employs 240 people world-wide.

Ryan Morrow, operations director, G2V Group said: “Chancery is an exceptional building, right in the heart of the city and it is important as we bring our two operations together we have a space which reflects where our business is going.”

OBI represented G2V on the deal. Andrew Cowell, transactions and asset management, OBI said: “G2V is a hugely successful recruitment business and it makes sense for them to move into The Chancery to drive efficiencies, invest in their working environment and give them a single, impressive presence in the heart of the city.”

Knight Frank represented landlord PATRIZIA. Luke Lebrun, asset manager, PATRIZIA said: “It is great to welcome G2V to Chancery. Since we completed the refurbishment of building we’ve seen a lot of interest in the space from a range of occupiers in different sectors. G2V will join Atadius Credit Insurance, Sanderson Weatherall, Korn Ferry, Duff & Phelps and Yorkshire Bank.”

This news story was featured in Insider Media.