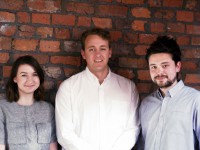 Matthew qualified as an architect in October last year and joins Formroom from Cassidy and Ashton in Preston.  Matthew attained a First Class Master of Architecture degree from the University of Liverpool where he received a number of prizes including the Anderson Bursary and the Tyson prize for engagement with technology.  Matthew is working on several projects for Formroom including a hotel for an international brand and the conversion of the Grade II Listed Prescot Watch Factory.

Tom, originally from Cape Town, joins Formroom as a Part II Architectural Assistant.  He received the equivalent of a First Class Master of Architecture degree from the University of Cape Town in December 2014.  Tom has a wealth of technical expertise having undertaken numerous technologist roles during the course of his architectural studies eventually taking up the post of Senior Architectural Technologist at Bell Architects in Cape Town.  He recently relocated to the North West of England to further pursue his career and work towards the completion of his professional examinations.  He is working on projects including a range of student accommodation schemes and the refurbishment of the Formroom offices in central Manchester.

Charlotte has taken up the post of Studio Administrator.  She will help with general support and administration tasks within the office and also assist with managing the firms social media presence and help with the production of marketing and planning submission documents.  Charlotte is an experienced administrator with an academic background in Contemporary Art Practice.

Tim Groom, director, Formroom Architects said: “I am very pleased to welcome Matthew, Tom and Charlotte to Formroom Architects.  We have a number of new and exciting commissions and it is great to have such high calibre additions to the team. As a company we are committed to ensuring our people receive the best experience and training to help them achieve their professional aspirations and we felt that our new hires had just the right attitude and approach to help the practice achieve its ambitions for growth.”

Manchester practice, Formroom Architects, was established by Tim Groom in 2006. At the heart of the studio is its vibrant team of talented architects which has a proven track record in delivering creative projects across a range of sectors, including student accommodation, residential urban regeneration, hotel, restaurant and office projects as well as retail and leisure developments.

Personal in its approach, Formroom works collaboratively with its clients and business partners, to develop an original, tailored solution to every project, and prides itself on offering honest counsel and unrivalled service.

Other recent schemes developed by Formroom Architects include a 331 bedroom high-end student residential development which forms the last part of the Liverpool One Masterplan, and the renovation of a Grade II listed former watch making factory into extra care accommodation in Prescot, Merseyside.

The news was covered by Place North West