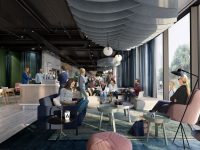 Grainger PLC appointed Ascend as its sole lettings partner for Clippers Quay, Salford Quays, just twelve months ago. Since then both phases one and two have been fully let, with the latter achieving an increase of 25% on rental return for the development.

Sam Brown, Lettings Manager (North) PRS and Build to Rent at Grainger PLC, said: “Having worked with Ascend on numerous projects, we approached them to conduct the lettings and promotion of the Clippers Quay development. We were confident in this decision, knowing their track record of promoting and letting PRS developments

“Ascend took to the task instantly, setting up a custom designed marketing suite in its Deansgate branch, specifically for the promotion of Clippers Quay. We are thrilled the team managed to let 50 homes, 33% of phase one, within just three weeks.

“Ascend has used its extensive knowledge of the industry to successfully increase lettings for a number of Grainger PLC developments in recent months. We are delighted with Ascend’s quality of work, vast market knowledge and the support of its dedicated BTR team.”

In March this year national developer, Atlas Residential, appointed Ascend as lettings agent for its Anaconda Cut scheme. Salford’s tallest building, Anaconda Cut consists of one, two and three-bedroom apartments set over 44 storeys. With amenities including a gym with staffed personal trainers, yoga studios and a sky lounge, the building has proved a popular choice for Ascend’s client base with 70% of the building now leased.

Ged McPartlin, managing director, Ascend said: “We’ve had an incredible twelve months dealing with leasing homes across some of the most outstanding new residential developments we’ve ever seen in Manchester and Salford. The popularity of Clippers Quay and Anaconda Cut show the demand for high quality homes is very strong and are attracting residents who are new to the city centre and living here for the first time.”

Ascend has increased its dedicated BTR team in Manchester to 30 people which includes marketeers as well as negotiators. The agency expects to see further rapid growth having recently signed partnership agreements with Select Property Group and its Affinity Living portfolio.

This news story was featured in Property Investor.