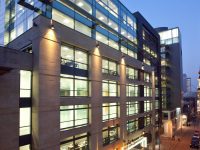 OBI represented the landlords Impax Asset Management, as sole leasing agents for the Grade A office building, which has been owned by them since 2010. Impax has now completed its business plan signing four new office leases and two new retail and leisure leases since acquiring the building.

The 100,000 sq ft building features an impressive atrium was completed in 2007 and is also home to Lloyds Bank and Aon.

Will Lewis, co-founder of OBI said: “When we met Impax to discuss the agency role, we took time to understand the vision and business plan for the 40 Spring Gardens. We have enjoyed working closely with the fund managers and since our involvement we have been successful in letting the final three vacant floors in the building. I’m really pleased that we made a noticeable difference since being appointed as sole agents on the building last year.”

This news story was featured in Insider Media.